Fortunately, neither of them turned into an ice bridge or tiger after pulling off this trick this morning. That would have resulted in a level of chaos I could not possibly imagine... 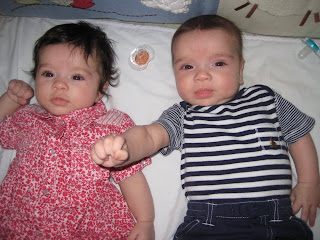 Grace and Dylan are growing nicely, and have made the ramp-up to bigger bottles! Dylan weighs more than twice his birth weight, and Grace is getting awfully close. Needless to say, we are pleased to see them growing and becoming more dynamic. 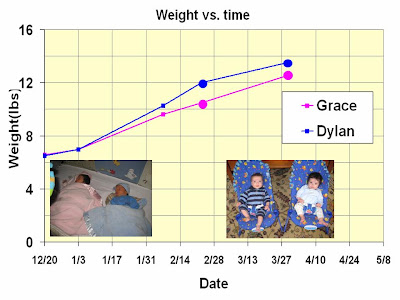 Grace took Truman and I out to play in the backyard yesterday afternoon. Here's a snapshot of us enjoying the small sliver of springtime in suburban Houston (which precedes the other 3 seasons of July, August, and summer.) 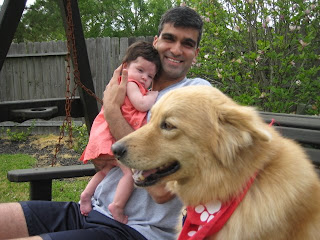 We are now 3 months old! Grace and Dylan turned 3 months old on Thursday the 20th. It is such an exciting time. That day, Dylan laughed out loud for the first time. In addition, they are starting to hold objects now.
To celebrate, we packed them in the Pilot and took them out to lunch today! 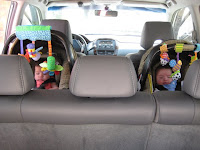 Ok, so that was a bad play on words. However, the management and administration of eta1207 found it mildly amusing. The winners write the history books...

Looks like Grace has a new nighttime activity -- spinning like a roulette wheel. Earlier this week I woke up to feed them and Grace was nearly upside down from where we had placed her the night before. She was nearly kicking Dylan in the head! The next morning she apparently had launched into her spin antics again, this time landing perpendicular to Dylan and kicking him in the side. He seemed to be a fairly good sport about it, tolerating the jostling from his sister. (In all fairness, Grace is just "getting even" for having her brother kicking her in utero for the better part of 2007.)

Here is a picture taken about 5:00am Wednesday. 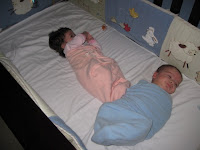 Grace continues to be our little princess. This morning Denise read her "That's not my truck", which is one of her favorite books. It is a good read....I highly recommend it. 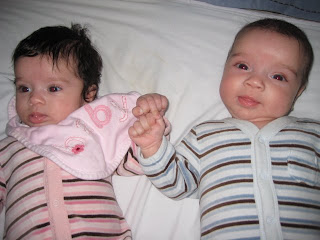 Apparently, dogs need tummy time also. I walked into our bedroom yesterday afternoon to see Truman sacked out on the tummy time mat. While I was thinking "Truman, get off the mat...I don't want your hair all over the kids", somehow the words I blurted out to him were "Ohhh...you're such a handsome little puppy." Yes, dad's going to need some work on becoming the disciplinarian... 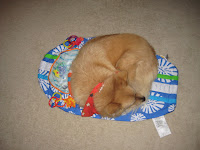 Another diversion...I imagine the idea emerged from a conversation that went something like this:

Jack: "Doesn't it strike you as unusual that never in human history has there been a radio station that continuously plays good music?"

Jack: "I wonder if something could be done about that."

Jill: "Well, it doesn't seem that complicated...aren't there any bands that play good music?"

Jill: "Couldn't you just play a station with just that artist, and avoid all the talent-free rubbish?"

Jack: "I guess we could...whoa....are you thinking what I'm thinking?"

And thus was born XM Led...Satellite Radio Channel 59. A stalwart at speed dial #1 in the Honda Pilot, it has been the savior of my commute and the source of occasional air drums while stuck on Highway 288. Sadly, it is taking a hiatus for a while, but apparently it will be back later in 2008. Hurry back --- I can only maintain sustainance with the hair band channel for so long...
Posted by R at 6:01 PM 1 comment:

Karate kid and the happy princess

We'll let you guess which one is which! 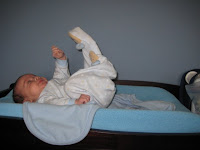 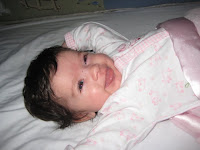 We've increased our efforts to give the kids tummy time and gym mat time recently. They seem to be doing fairly well, although they do get overstimulated rather quickly, and then get somewhat fussy. As you can see below, Truman has been doing a great job supervising their activities. I always knew he had management potential...
Truman keeping things under control 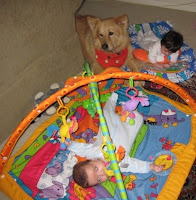 After their tummy time, they can get pretty tired. Here is Grace relaxing under a new blanket that our friend Robin from North Carolina made for us.
Snoozing under the new blankie 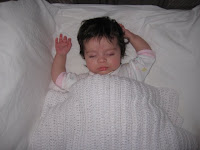 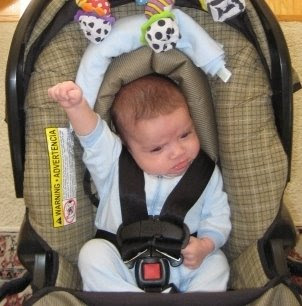 Dylan leads the fight in the struggle against the imperialist oppressors. However, since he can't talk yet, we're not sure who or what he's being oppressed by. Maybe he just wants his bottle.
Posted by D at 8:27 PM No comments:

I cannot be contained! 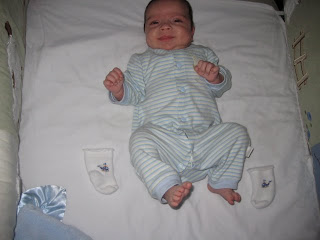 Dylan is gifted at escaping swaddles, socks and shoes. You can turn your back and poof, the kid has broken free from his restraining attire!
Posted by D at 8:23 PM No comments: