We enjoyed a dynamic family Thanksgiving at Denise's parents place. Denise's brother David and his family came down from Dallas with their 5 kids in tow, and it was the first time they had met their little cousins. Thanksgiving meal was fantastic, particularly a certain butterscotch pecan pie which seemed to vanish rather quickly! After the meal, we played our annual "Turkey Bowl" game in the street...generally a dizzying pace of touchdowns driven by lot solid offense and porous defense. We concluded the event by each team claiming victory (another tradition).

On Friday, we trekked to the zoo -- giraffes, lions, birds, meerkats, monkeys -- and managed to avoid the rain showers that came through (a merry go-round is good cover!). After that, we proceeded to the Aquarium restaurant downtown. Dylan was fussy, but when we took him to the fishtank, he was mesmerized by the wiggling floating creatures. Maybe dad can take him fishing once he gets a bit older (no, not next month).
Attached are a few photos from the holiday weekend -- enjoy!
The zoo within the zoo 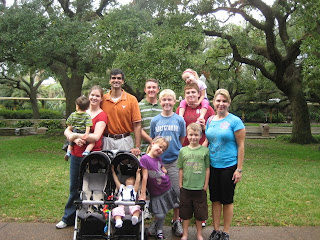 Grace's encounter with the kimodo dragon 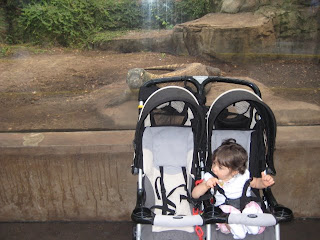