Chronicles of week one...

Many of you may recall the Peace Corps slogan "the toughest job you'll ever love". That would be a somewhat fitting characterization of the first night with Dylan and Grace. I think the kids were a bit anxious about the change in environment, and perhaps they sensed our nervousness as well. By the writing of this note, all readers have proof that we did survive! At 2:30am Sunday, with us both holding our kids...OUR KIDS!....we were just smiling at them and each other in the nursery. Nothing had to be said -- it was a look of "there's no other place I'd rather be."

On Sunday, things started to fall into place as we had the full day at home and started to get into a routine. Grace and Dylan exhibit new things about their personalities and traits every day (granted, it's only been five so far). Grace can make two distinct types of eye contact. Most of the time the glance is the "I'm a little princess make-you-melt" look. However, she can also display the steely gaze reminiscent of the look Clint Eastwood had in his eye during the movie Unforgiven, when after rightfully being accused of shooting an unarmed man, stated "Well, he should have armed himself."

Dylan can eat like a champ and after chow time sleeps like...er...a baby!? I affectionately call him the D-train, as in "don't get in the path of the D-train at feeding time, or you'll get run over."

Today's most magical moment...we put the kids in the crib this afternoon, parallel as always, and when coming to check up on them, they had both scooted their heads closer to each other. Selfish dad was more preoccupied with capturing the Kodak moment than the fact that sudden bright flashes (for instance, the flash of a camera in a dark room) are somewhat disconcerting to infants. Here's the picture below. 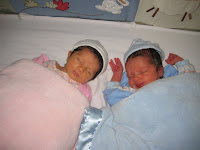 Tomorrow is our kids' first Christmas!!! All the grandparents will be there and it will be a very special day. Extra hugs and kisses for the kids. Not to forget our "fluffy child", there are also some very juicy bones wrapped up under the tree.